So far I have been writing nonfiction only—not journalism, nothing in the pursuit of truth-- just a healthy fascination for real absurdities around me and how they relate. In college I called my personal essays “documentaries” and I called my poems “tiny essays.” I built up enough of these to earn a degree in Creative Writing, all the while wondering why everyone else wasn’t taking advantage of this obviously easy A.

The last time I wrote real “stories” was probably 5th grade. Since then, the labor of “imagineering” a whole world of fiction seems too great a task. I can remember some assignment in Mrs. Massey’s class where I turned in a page about the energy of the big city, Atlanta. There were some lines in there about red and gold garlands of traffic on I-75. (See, my material hasn’t evolved). My teacher was disappointed that I didn’t stick to the fables I had previously submitted, featuring elves, talking objects, and slightly modified Greek goddesses.

Of course, I am a natural liar— never letting the truth stand in the way of a good story, etc. I frequently condescend to think that I know what people are thinking. It is this speculative liberty, maybe, that connects my essays and potential short stories.

For example: I came home this afternoon to find a plastic sack of tomatoes onmy doorstep. Three of them with that, small, firm assymetrical look of homegrown stock. That’s all the evidence- the nonfiction part of it.

But I know its Maryann again, trying to be neighborly. And I think I know why. Here’s the gray area in which I invent a backstory.

She has managed to raise these tomatoes in the backyard alongside our shared fence. I can see where she laid a set of iron burglar bars on its side to defend the furry little shoots from her 2 dogs.

In a couple sheepish moments of sobriety I’ve caught her coming or going in the driveway. She has given me a progress report on her crop and promised to share them at harvest time. It’s like she’s playacting the part of a friendly neighbor. Nevermind that the week before she was standing in the same driveway, drunk or high or otherwise out of her mind, screaming and cursing at one hour intervals throughout the night.

I am interested in her lame attempts at normalcy. Does she do it for my benefit? She’ll get up early to mow the lawn, but stop halfway. The line of clippings leaves a brown ridge down the center of the yard. It’s a week before she picks up the task again.

I think shame prevents her from continuing, from delivering the tomatoes in person, from trying to be normal. Just Wednesday she’d had enough beers to let herself onto my front porch. She arranged her drawings on the hood of my car and urged me to come out to the driveway, our usual meeting spot, to look at her artwork.

I didn’t go to school or nothing, she kept saying. This just came out of my head. She kept asking the same questions over and over again, pausing to admit that she’s drunk, lonely, and doubtful.

Meanwhile, I’m anxious to get back inside and on that train of thought I was writing about, a fictional, speculative woman just like her. Knowing I’ll catalog the dialog from this conversation to write it down later. Are other people doing this to me? A simmering disgust adds to my fixation on her. Or is this an exercise in compassion? Trying to understand and forgive another person? Is she any bigger than my perception of her?

At least I’m not exploiting my friends and family in my writing (this time). Maybe I’ll even have the courage to let this go out in public. 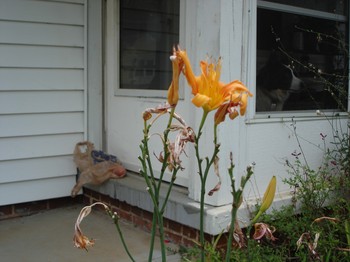