The Backyard in June
Considering Non-Nonfiction

Thomas L. Monroe, Jr is the name on the mailbox, but the kids call him Monroe. His beergut and broad whiskered chin give him the silhouette of a large man, but from behind, it looks like a he could use a decent meal. His baggy dungarees and red suspenders have that grime-softened, slept-in look that takes weeks to achieve. Monroe can’t be much older than 55, but his husky drawl and backwoods sayings remind you of an old-timer. His mustache shuffles on his thin upper lip as he warns you about the blacks, the sheriff’s deputy, and the homosexuals around town.

On hot days, he’ll fool around on the porch wearing suspenders and no shirt, but it’s rare to spot him without a hat. At all times, he keeps a trucker cap mashed on his surprisingly bald, cone-shaped head. He stalks the block, belly first, with a dachsund on a rope and still plenty of strength in his shoulders.

Monroe motors around town in his rusty orange Chevy picking up any piece of junk that might fetch a couple dollars at the recycling plant. You can spot his truck at all the Stumptown landmarks- Arby’s or Zesto or the SaveRite Grocery. “I got but one wife now,” he says, “and that’s the microwave.” 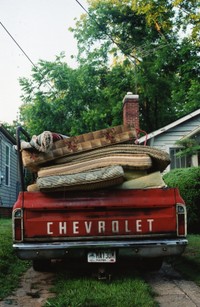