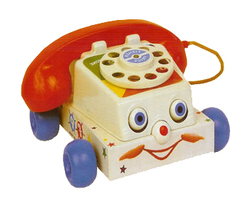 That first August of the new millennium,
the sidewalks teemed with toddlers learning
to walk and talk at the same time,
while poking at their bright toy phones.
There were stories of accidents.

We crawled up out of the subway,
blinking, as if waking from our naps.
We peered around for two comforts:
the towers that nailed down Manhattan,
and the bars on our cell phones.

My boss sent me to the Flat Iron Building
to find a walkie talkie of my own.
The store was like a tall glass ship
cruising due north on Broadway
with its chirping cargo laid out in rows.

Like magic, it could locate Mom and Dad,
in faraway lands. My friends back home,
a list of names, became imaginary.
Their voices conjured in a stairwell,
or elevator, a rooftop dinner party.

You’ll never guess where I am. I thought
myself one of the crazies, receiving
through hot plastic, and glittering guts
a broadcast of so and so’s baby shower,
who married who from high school.

My cellie shivered in its thin green light.
At 2 am, I heard it from the kitchen counter
from across time zones, to be nuzzled
and nursed. Taking on names of men.
I couldn’t keep them straight.

That summer I was stumbling too
along with the flock across avenues,
towards diversion, towards shade-
a training for that sudden moment when
we’d be lifted up, connected, grown.