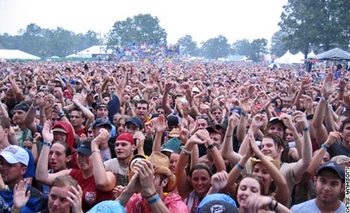 The hippies have a good thing going at Bonnaroo. Everyone seemed genuinely happy to be there– smiling, dancing their asses off, sharing bowls and contraband Gatorade, spooning in the shade or waiting in line politely for port-a-pots, ATMs, and the ferris wheel. I didn’t see a single brawl or belligerent drunk. I didn’t see any pissing-in-public or throwing of bottles. No obnoxious corporate sponsors or security guards. No pickpocketing or puking or heckling or groping or arrests– the free-for-all antics that you kind of accept with Big Shows.

(Actually, free-for-all is an illusion– Bonnaroo is a miracle of logistics and planning. I marveled to look around and imagine the sheer cash flow of the thing. What’s $250 tickets times 80,000?)

Of course, my impressions are pretty rosy because I went home each night and took a shower and slept in my bed. Friends who camped have more hardcore tales of what transpired after dark. i.e. those peaceful nappers are actually passed out drunks who get tripped over, stomped on, covered by ants, and tangled up in sloppy, unintelligible fucking, cheered by a crowd. Then there’s the creepy contrast between the “recreational” drug use of the affluent tourists and the East Tennessee methheads who come out of the woodwork for Bonnaroooo. Anyways.

In a crowd that big, caution definitely treads on the vibe. Its hard to dance when you’re vaguely keeping one eye on the nearest exit, and the other on your wallet. As a woman, I’m particulary wary of big crowds. Maybe part of what made Bonnaroo so much fun is that the crowd was the well-balanced. Bonnaroo is still whitey as hell, but there seemed to be as many women as men, maybe more.

Make the ladies feel safe and they will drive cross country to not only show you their tits, but walk around topless all weekend, sober, happily smeared with mud, body paint and electrical tape. They will crowd surf (Franz Ferdinand), mosh (Gogol Bordello), rush the stage (Hot Chip), and jump onstage and freak eachother (Girl Talk). (I know, crowdsurfing, moshing, and freakdancing. Its like a ‘90s revival.)

I remember reading an interview with Thurston Moore where he’s asked about being married to a powerhouse like Kim Gordon. He made this awesome comment about when you keep the queen bee happy, the honey flows freely. So yeah, the hippies have a very good thing going. There was even a vendor selling those little funnel contraptions that allow you to pee standing up.

Other than the belly dancers and burlesque side shows, and Sting taking off his shirt, the girliest part of Bonnaroo had to be Feist’s performance on Sunday. For me, it was the high point of the whole sweaty, dusty, sunburned ordeal. And gawd, she was striking on stage. At turns poised, then playful, then powerful. Leslie Feist looks so much like her voice– stylish, delicate, immaculate. Her songwriting alone is reason enough that her DNA should be shelved somewhere, but recordings don’t do her voice justice.

I was a little frightened, however, at how skinny she looks. Hopefully I’m wrong about this, but I couldn’t help thinking it: 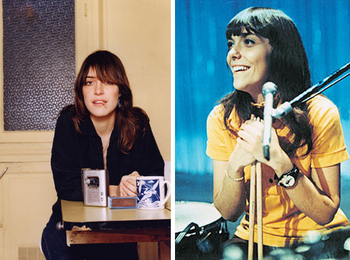 Could it be just the bangs?

She was the only performer I saw who actually interacted with the audience. We obediently sang along, whistled along, snapped our fingers. Somebody waved the Canadian flag. Somebody gave her a bundle carnations. Somebody yelled out I love you Leslie. And a guy’s voice yelled out I wanna fuck you. Just a little reminder of the ugly anonymity of the mob. Maybe this is why other bands don’t try to engage the audience. Maybe this is what happens when a woman gets on stage.

And, of course, there was the girl with the sweltering voice who cleverly waited for a spat of silence to loudly, but sincerely, give a simple "thank you."