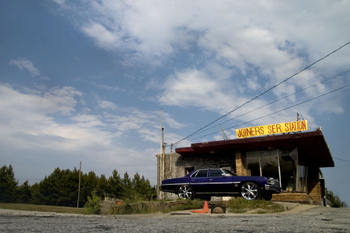 Twice in one night I got called “lady.”

I was standing in the Kroger parking lot on Metropolitan gawking at a minor car wreck. A small white 4-door had turned the corner way too fast and jumped the curb. It plowed up the sidewalk and landed with an awful cha-chunk on an elevated concrete manhole. I think. What did it land on? It was hard to tell. All four wheels, no three, no four again, were suspended above the ground.

It was like seeing a rainbow. I needed to share it with someone, anyone. The driver of the car tried reversing, then revving the engine. This only caused the wheels to spin stupidly in the air and the car to wobble on its mount. It was bad to laugh, but I laughed. I scanned the parking lot for fellow witnesses, someone who might have a clue what to do.

“Excuse me,” said a voice behind me. “Can you tell me the way to Buckhead?”

Here was a skinny young Mexican guy with braces. He had not seen the accident so I gave him the eyewitness account. Meanwhile, the driver and his family descended their dangling Taurus and three Burger King employees started across the asphalt. Maybe they were planning to lift the car?

The kid, Arturo was his name, was mostly unphased. He was anxious to find the Marta station and get back to Buckhead.
Feeling guilty maybe, about the stranded family and their busted up Taurus, I offered Arturo a ride. “You’re not going to kill me, are you?” I said. “I’ve got a hammer.”

I asked him questions as we headed towards Stumptown and he answered in broken, lisping English. He was starting at Emory next month. His mother was in Mexico, his father in Brazil. Near University Ave, I heard him on his cell phone telling his roommate, “This nice lady is giving me a ride.” That’s funny, I thought. I’m a nice lady, giving him a ride. He probably would’ve got mugged on Marta.

Later that night I drove deep into Kennesaw, down a dirt road searching for a stranger’s house. “Billie” and I had arranged a transaction on Craigslist and because of my detour with Arturo, it was now dark. I hadn’t expected the dirt road, the series of ramshackle trailers and outbuildings. Where am I? I thought. Lord. Again, I was thankful for the hammer.

I was met by Samuel, a stocky Mexican dude with his name sewn on his shirt. He introduced himself and Pedro the chihuahua.

“Billie’s not here,” he said, “She went to the store. She said some lady coming by.”

It took me a second to realize that I was “some lady.” Funny how old it made me feel, how detached.

I feel the same when call "Sir". Nice temporal depiction of the car rocking. Interesting that these two stories were made possible by Mexican men. You are not just a lady, you're a lady with a hammer!

How bad is it that every time I have an urge to pull over at a Marta stop and give a lady with 3 kids and a baby carriage a ride, I keep going because I'm fearful that something bad will happen? Dad used to pick up hitchers - do you remember?

Sweet story well said. Really like your photos. Linked you on my last post; only just found your blog. Glad I did.