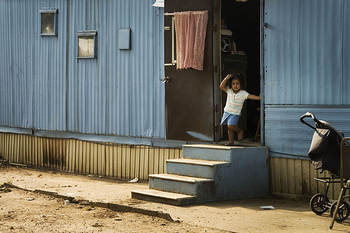 The kids across the street, they know what goes on. Five of them, chanting, “Lemonade for Sale,” they come running like they’ve been waiting for me all day. Cynthia and Miguel and their prim little cousins from Oklahoma.

“Its a hundred degrees out here, you know that?” I said. They were already crossing the pavement, barefooted, carefully bringing me a thin plastic cup. Yesterday I peed into a cup and it looked like this.

“Don’t drink it!” shouted the oldest. “Its nasty!” But even he crossed the street to see me.

The little ones crowed, “It's good!”

I drank it. The lemonade was warm and sweet— the only flavor of Kool-Aid I can bear. Granny used to mix it in a scuffed crystal pitcher and let me turn the wooden spoon.

“Nooo,” they giggled. I paid them with two quarters.

There was a green tarp strapped over the neighbor’s car. It filled with the hot breeze and lifted.

“Look at that.” I said. It hovered and strained against the twine. “We put that tarp on there because her windows are down.”

“She don’t have the keys,” said Miguel.

“Where is she?” asked the cousin.

“She’s sick.” He is thirteen and he thinks he’s grown.

“In the head,” he insisted.

“In a nursing home?” says Joseline. She’s so small, I forget she’s ten. Not a baby. Why do I lie to kids?

My other neighbor opens her door a crack and waves a dollar bill. “Y’all selling lemonade?” she croons.

They scream with delight and run to fetch the money. I’m free to get out of the driveway and into some AC.

The last thing I see is Joseline’s mother yelling for them to come inside this instant. They are visiting from Oklahoma, but they already know the story. One neighbor is sick in the head, the other is even worse. Where did they get the idea to sell lemonade? They know this isn’t that kind of neighborhood.

yes, we should collaborate.

Ah yes, but it's not the kind of neighborhood where you give rides to total strangers, either... is it? ; )

colorful story, hannah. i can see it somewhere in a so. lit. anthology.