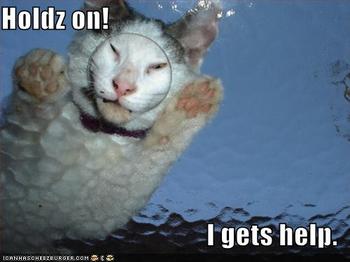 Someone oughtta write a paper on what makes lolcats so violently funny. A linguist or a pissy language arts teacher. Or me! Taken alone, these deceptively innocent jokes work on so many levels, so instantly. But as a whole, they're a weird social phenomenon. I actually look at them sometimes, sitting at my desk with tears running down my cheeks and say, gawd, why do they make me laugh so hard?

This question has been bothering me. Because I think they are really funny and beneath the innocent parody there seems to be some casual racist, classist mocking going on. Its like an inside joke, and the more you read them, the more you're gratified by your own sense of humor, by being "in" on the joke. I recently subscribed to the RSS feed for I Can Has Cheezburger, and I actually feel kind of dirty about it. I have to end it.

Last week, I tried making a few of my own lolcats to send to my sister on her birthday. They aren't so simple. I started wondering, what is the formula?

Wikipedia cracked me up. Here's how they broke it down:
Common themes include jokes of the form "Im in ur noun, verb-ing ur related noun." "I haz a noun" pictures show a cat in possession of an object while "Invisible noun" show pictures of cats interacting with said invisible object. Another common lolcat displays a cat with a specific look, which is described by X, and the text, "Xcat is not amused" or "Your offering pleases Xcat."

But there's more to it than that. On the first level, lolCats are a familiar joke. We grew up seeing stuff like this in every public institution: 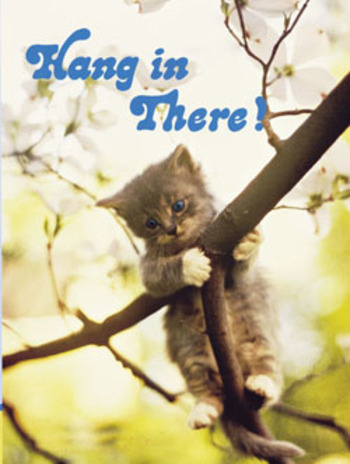 They take aim at what I consider to be a fair game- cat lovers- while acknowledging that we all indulge a bit of pet sentimentality ourselves. I roll my eyes at my cousin who's always sending annoying forwards of puppy photos, but I have to admit that I look at them and say awww. The truth is, the photos are often unbelievably cute, even before they get captions. With lolcats I get to mock stupid internet-using pet lovers, and look at cute animals at the same time. Savvy!

We know that baby-talking for animals is silly, but we do it anyways. Lolcats take anthorpomorphism to an absurd and very specific white collar world- cats doing not just people things, but really technical, mundane people things, like say, editing a Wikipedia entry or talking to tech support. What do these activities reveal about the audience?

And you don't have to be a smug graphic designer to laugh at the shitty typography. The homemade-internet look is part of the joke too. Ah, the plebes with their low-budget digital cameras and photoshop knockoffs. ha ha.

So even with these elements, we could make a cute greeting card. But that wouldn't be funny enough.

Its the broken grammar that makes them so twisted. The really hilarious lolcats take the punchline, and say it with a speech impediment (i suk mah fum), or in myspace slang (kthnxbai!) or with a southern accent (Mah mortgage dun readjusted!) or in ebonics (they be stealin' my blanket). 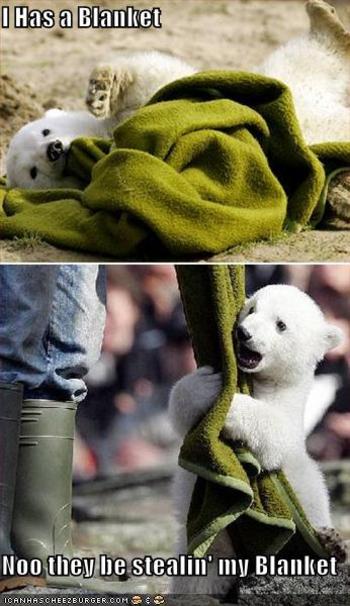 And wow, we are now making fun of so many things I can hardly keep track! As a southerner, I can't help but notice that, as usual, the voice of ignorance has a southern accent. I hate to kill the joke, believe me. Does laughing make me a yankee racist snob? By pointing out these impressions, am I just revealing my own linguistic stereotypes here?

i'm a bit lost but i'm laughing as i type this. will someone clue me in or have i been living on another planet???

From Joseph Epstein's essay, "The Perpetual Adolescent": "And why, just now, does so much of contemporary entertainment come in the form of animation or comic-book cartooning? Such television shows as "The Simpsons" and "King of the Hill," the occasional back page in the New York Times Book Review or the New Yorker and the comic-book novel, all seem to feel that the animated cartoon and comic-book formats are very much of the moment. They are of course right, at least if you think of your audience as adolescent, or, more precisely, as being unwilling quite to detach themselves from their adolescence."