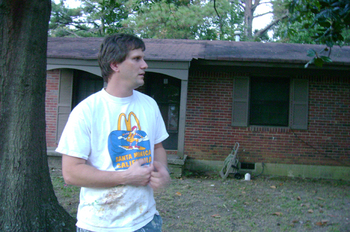 Whenever Jason is telling me a story from his childhood, like the time he put on cowboy boots just to slide down the neighbors driveway and everyone applauded, or when he burnt the skin off his toes stomping out a secret "experiment" that caught fire, or when his sister spraypainted "CP" on every tree in the backyard, or when the next door neighbor's husband got struck by lightening, or the time David Turner got the breath knocked out of him after he failed to clear the creek on his bike, despite the plywood ramps they had constructed for the event, and they tried reviving him with a waterhose, my first question is always, "Now, how old were you when this happened?"

And he is never quite sure how old he was, because he spent his whole childhood in one place-- the house on Karla Circle. He claims the years bleed together in his memory. He will then perform a little equation like, "it was after Matt got his beetle but before my mom died, so that would be '88, '89." Or something like, "that was the year we got bikes for Christmas and right after that, Van busted his spleen riding, so I was probably 9."

It's not that he's forgetful. Jason's stories render detail as if he's describing a video he's edited, or a painting he's studied. I guess "home" does define our sense of a personal timeline, and his lasted 17 years.

It doesn't help that neither of us can remember seeing any baby photos of him. There is little documentation, but we still found bits of evidence: a faded "CP" on the brick and a scrap of rusty chain embraced in the bark of a tree.

Rob has a strange knack for dates. As much as he moved around as a child, he gauges how old he was or what he was doing by where he was on his multi-stop journey. His propensity for remembering minutiae amazes me daily.

Ha! You should talk to Carolyn about that. I'm pretty certain Joe's stories have similarly ambiguous dates. :)

I'm the same way as Jason. This post does a good job of capturing how temporal we are, how fleeting.

Enjoyed it, as always!

i have about eight sections of my life. they're linked, coupled, stored, in a few ways. you know how it is. but sometimes i forget certain chunks, like they could easily be cut out of the equation and never be missed. hardly ever can i think about more than a four year span. nothing really fits together, my life has very distinct chapters, the type with titles and no numbers, they don't really translate well from one to the next. sometimes i like to think about moving them around, putting one chapter before the other. sometimes it actually works, but mostly it's like two strangers meeting, having absolutely nothing to say to each other. all in all, i often find myself realizing i've just done a lot in 20 years. i'm 23, but i don't count the first years when i didn't know how to remember.