Persuasive writing
Mystery architecture off I-675 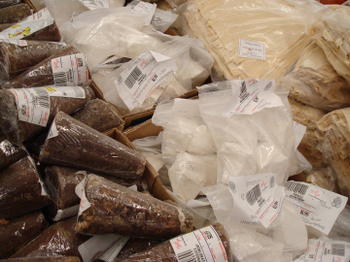 I’m always griping about “Wayward” Foods, but only when I'm feeling deprived. The truth is, I love the Wayfield. I go there at least once a week because it's at the end of my street and on most days it's easy to find parking. They're compact and clean and unpretentious. So what if they don’t have neat stuff like gorgonzola, fennel, soy creamer or practically anything organic? For sandwich bread, half-and-half, an emergency roll of cookie dough or a forgotten lemon, it's swell having a Wayfield Foods within walking distance.

I finally confessed my love for the Wayfield last night. Lacking the mental stamina for a trip to the Whole Foods singles scene or a suburban Publix, we dropped by after dinner to pick up some milk and cereal. I was singing Wayfield's praises right into the produce section where I spotted some "Georgia White Dirt" for sale. I’ve heard of old timers eating this stuff to settle an upset stomach. And I’ve seen it for sale at roadside boiled p-nut stands and such. It says right on the package “not for human consumption,” but it’s shelved right between the cane sugar, plantains, corn husks and yellow root. (I had to look it up. I think its another herbal remedy.) I bet you can't get that at Trader Joes. 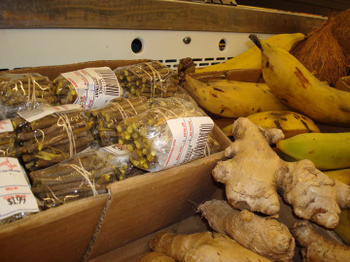 All the young couples moving to the Southside bemoan the lack of good grocery stores. Its a neighborhood subject we always bring up, like the weather or the traffic. And its true. It seems like there are liquor stores and fried chicken chains and hot wing joints everywhere but very little access to fresh, nutritious foods. The people in the checkout line with me at the Kroger Citi-Center or Sav-a-Lot are buying boxed, canned and processed foods, so the fresh produce selection is always pretty weak. (By the way, Sav-a-Lot makes Wayfield look like freakin Dean & Deluca. Slashed cardboard boxes in the aisles serve as display racks, generic Oreos spilled out on the shelves, flies in the freezer.) And its not just the locals. I have some suburban relatives who don’t buy veggies unless they're processed and packaged and marketed to them with a name like “Simply Potatoes.”

I guess I also love Wayfield because it bears a resemblance to the A&P and Winn Dixie of my youth in Stumptown. Cheese came in yellow and orange, rectangle or square. Even 15 years agao, you couldn't find rice cakes or pita bread and hummus. Your selection was limited to the name brand and the no-name brand and not much in between. But you could ride your bike there and back.

Can't believe you didn't use a picture of those green bag stands and the beautiful yellow WF bags. Wayfield has the prettiest bad for the environment plastic grocery sacks in the world. I love them so much. Hannah, can you photo those bags next time you are in there?