Mystery architecture off I-675
Book Prescription 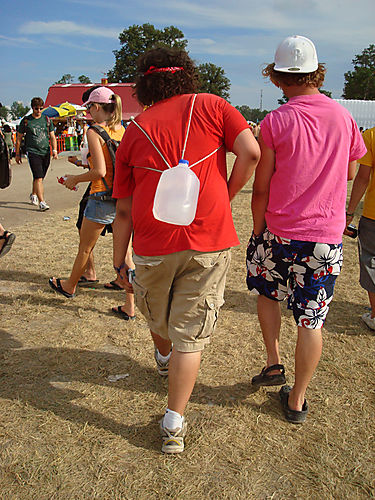 Your Own Personal Bonnaroo.
We took off for Bonnaroo after I finished class last Thursday afternoon. My mom, husband, nephew, 2 girlfriends and I all packed in Mom’s SUV for the road trip. Helena (age 14) and Justin (18), on board for their first Bonnaroo, were probably mystified at how silly the grown ups were acting.

This was my second year at “the Roo” and I’m as surprised as anyone to be employing such a term. We used to watch the procession of summer caravans on their way to Manchester and think, I smell patchouli. But you just can’t argue with a lineup that includes legends of rock, country and blues alongside the same indie bands I’d normally catch at the EARL. I’ve learned that there’s a thousand different ways to experience Bonnaroo and the point is to make it your own.

Our strategy has been to stay at Mom’s in Sewanee (about 40 miles away), drive down after the hottest part of the day (2 or 3pm), watch 8-10 hours of phenomenal music and come home to a cozy bed and shower. I’m sure the whole camping experience is a blast, but I love having the chance to escape for the night, recharge and relive the whole thing the next day. 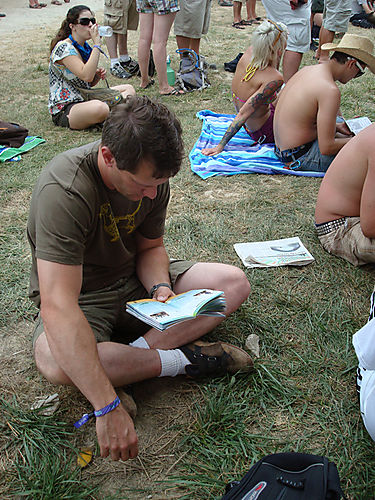 Best Way to Start Bonnaroo with a Bang.
After we sat in traffic on the shoulder of I-24 for at least an hour, then idled in the bottleneck of cars and campers at the gates, endured the long drive to day parking, long walk to Centeroo and a long wait at security, we finally arrived at THIS tent just in time to see MGMT at 8:30. I dragged Jason and Justin into the crowd up front. It was hot and I couldn’t see the band, but woooo it’s Bonnaroo! We stayed until they did that song about “this is our decision: to live fast and die young.” The crowd was ebullient, singing along, so so happy to be there. I guess when you pay at least $250 to attend an event, you’re committed to having fun, no matter what.

Next we wandered around like tourists, showing Justin all the sites. Made our way over to THAT tent so the guys could catch The Sword. I stayed long enough to get the general drift of things and then headed back to the “indie” tent of the night to find out what all the fuss is about Battles. This time I stood near the sound stage, where I discovered an clear view of the performers, plenty of room to dance and of course, the best sound. I ended watching almost all the other Bonnaroo acts from this spot.

The High on Life Award.
So Battles was satanic. Unbelievably fast, technical guitar rock that keeps upping the ante. It was hard to dance to, but even harder not to move around. It was an impressive performance, but don’t know if I could enjoy it at home. I felt lucky to get to see them live… that was the first of many moments where I felt like I was getting away with something… I kept looking around at the crowd, thinking, did that really just happen? And we saw it? 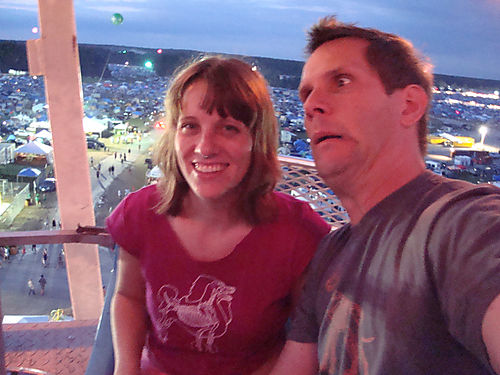 Most Fun Show.
After that, I reunited with the group. The day’s excitement was all catching up with us and we looked pretty sleepy. Vampire Weekend took the stage in no time and provided the needed recharge. I’ve been reading a lot about this band on blogs, but found the clips online to be kind of weak. They certainly brought the energy to their live show, magenta spot lights and all. In my opinion, Vampire Weekend wins as the Most Fun show of Bonnaroo. The band seemed excited to be opening the festival and the singer struck that perfect pitch between friendly and confident. At one point, he recommended we pogo or twist to the next song. And did we ever. 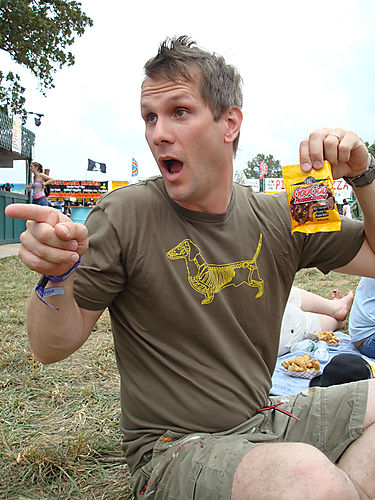 Nicest Surprise.
Friday’s schedule was impossibly stacked with great acts and I wish I would have admitted defeat early on. We commuted back from HQ in time for Minus the Bear at THAT tent. They were loud and jittery and just too much for me to take that early in the “morning” (it was 3pm).

Jason and I were sitting on a hay bale, sweating and trying to get motivated when we had the most pleasant discovery of the weekend– Edgar Meyer was about to take the stage with Bela Fleck. People who are into Bluegrass already know about these guys, but I came to Bonnaroo to see MIA and !!!, so it was kind of a shock to find myself in The Other Tent, covered with goosebumps, giddy with the display of acoustic talent onstage. My Dad has always listened to Bela Fleck, so I knew he was the guy who played unexpected stuff on the banjo. And Jason got into Edgar Meyer when he transposed a bunch of classical cello stuff to the stand up bass. It seemed like everybody in that tent, musicians and music lovers alike, was just completely ecstatic. Like it was a historic jam that everyone was happy to be present. I guess this is why hippies follow Widespread Panic around. 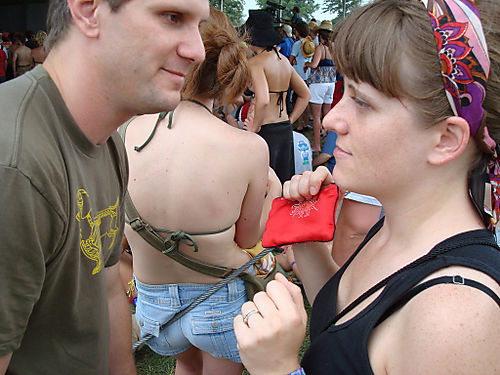 Disco Matinee
!!! followed by M.I.A. just about destroyed THAT tent on Friday afternoon. The singer for !!! had us all screaming and laughing trying to match his manic stripper dance moves. Then M.I.A. finally took the stage and invited everyone to come up and dance with her. Glee, bouncing, sweating ensued. 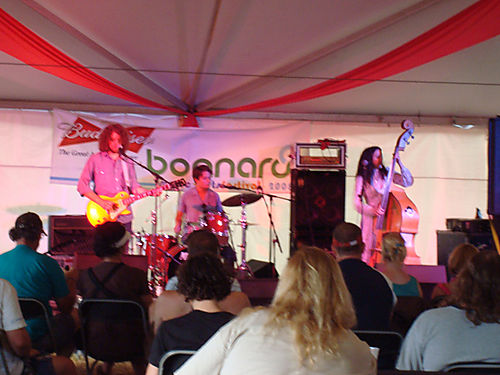 New Heartthrobs
I fell in love with Jack White on the jumbotron. I watched a ton of guys with guitars last weekend, but Jack White is the real deal. He seems to totally dwell in this stylized blues/rock persona– some timeless, black-clad, dictator like a cross between Anton Chigurrh and Ziggy Stardust. The Raconteurs are being hyped as a “real” band, and not just a Jack White vehicle, but I’m not convinced. I could watch him nonstop. The man is dangerous.

Meanwhile, Justin and I both had such a crush on Memphis’ Amy LaVere, we snuck backstage to give her a lemonade. I think we first heard Ms. LaVere’s songbird blues on an Oxford American compilation. They compared her stylings to Dolly Parton meets Ella Fitzgerald. The Troo Music Lounge– a tent really– didn’t do her velvety voice justice, but she could rock the stand up bass. She was so tiny and flattered when we delivered the lemonade. It was definitely a highlight of the whole festival for my nephew.

Saddest Defeat
I could list all the bands I’m sorry I missed. My Morning Jacket would be at the top of that list. We all had to make some painful decisions between favorites, or between standing and sleeping. Sleep won on Friday night. 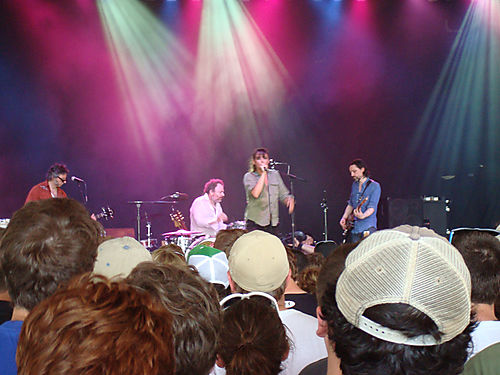 Well, now I can say I’ve seen them.
Half the fun of seeing a show is bragging rights. Cat Power and BB King were kind of forgettable, but at least I can say I’ve seen them. The same goes for Chris Rock and Metallica. Entertaining, possibly historic performances that are already a blur. Pearl Jam did not disappoint. They brought back a lot of memories from high school. They seemed genuinely awed by the audience and the opportunity to perform for at Bonnaroo (this makes a difference, I think). 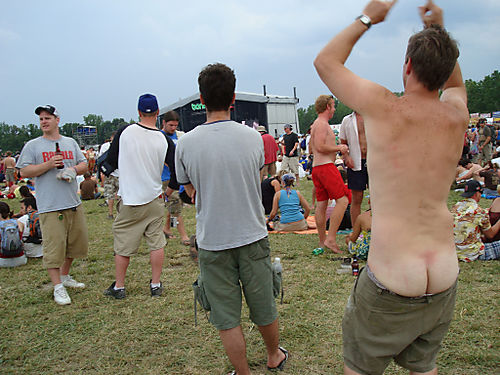 Still Can’t Believe it
I am still googling “Kanye West + Bonnaroo” to find some kind of suitable explanation for what went down on Saturday night. How could this happen? Don’t concert organizers and their legal teams have ridiculously thorough contracts that prevent these kind of performer fiascos? Kanye West might as well have cancelled. Considering the 80,000 tickets sold with his name on them, I am baffled that there is no lawsuit pending against him. We waited til 4 am, telling ourselves we would be rewarded with a life-changing show, then finally bailed. It was daybreak when we got home. The birdsong kept me awake for a little while.

The last drop
All I could manage on Sunday was Aimee Mann and Broken Social Scene and that was more than enough. Aimee was a cool and confident performer. She sounds even better live than on repeat on my iPod. BSS blasted us out with something like 7 guitarists on stage at once. Both made me realize they have a LOT more music than I'm familiar with and left me wanting more.