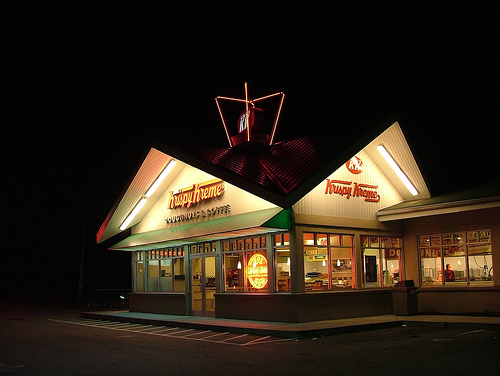 The Krispy Kreme doughnut “factory” on Ponce de Leon Ave has been there since the '60s. When the neon sign out front is switched to “HOT,” you can look through the plate glass windows to watch the doughnuts being born. A conveyor belt slowly moves the soft little doughballs from the proofing racks to the deep fryer, where they are flipped and fried by mechanical tongs. Then, golden and greasy, the naked pastries nose through a cascading sheet of liquid icing. As they bump along the snaking metal track, the wet icing congeals to a waxy shell. Some lucky employee, yawning, latex-gloved, corrals them into dozens, deftly flicking them into a flat white box using an special doughnut-flicking stick. This place has always been a magical fixture on a notoriously rough stretch of Ponce.

A few years ago, the Krispy Kreme on Ponce got a major facelift. Inside and out, the old doughnut shop is shiny and new. It’s now a place where suburban parents and kids, after a show at the Fox Theatre perhaps, can be seen late at night comfortably enjoying their coffee, licking the kreme from their fingers while cracked out hookers still dart along the edges of the parking lot.

They did a nice job with the renovation. It’s all retro chrome and seafoam green and those signature tiny polka dots. And you can still watch the doughnuts being fried and enrobed in sugar. But the wallpaper really bothered me. It’s a stylish collage of black and white photos from the chain’s history. I stood there for a while thinking, Where am I?

Right now, I’m miles away from Atlanta and it’s probably been over a year since I visited Krispy Kreme. But that wallpaper is still so puzzling to me. When I think about my hometown, that’s the kind of thing that fills me with dread. This always seems to be happening in Atlanta¬– they take a real place and tear it down. Or, even worse, they take a real place and make it into a non-place. A movie set version of a place. A parody. I don’t know. There is no there there.

Atlanta is full of non-places. I think Krispy Kreme was just responding to the trend of designing restaurants like a Vegas casinos– safe, phony versions of real places. In the Atlanta suburbs you can visit dynastic China (PF Chang) next to faux Sonoma (California Dreaming) next to Margaritaville (Bahama Breeze, Joe’s Crab Shack) next to Irish pub (O’Charleys). Around the corner from the Krispy Kreme is a condo complex called The Savannah. Why couldn’t it be called The Atlanta? What would that look like?

(Even when I was a kid, Bennigan’s kind of bothered me. All those fake antiques hanging on the walls… where did they come from? And what were they doing there in Stumptown, overlooking my baked potato bites?)

Why not just find some authentic period wallpaper? Rather than just restoring the ‘50s-era coolness of original Krispy Kreme, they made the place into a safer, franchisable version of itself. It could be anywhere. It’s like they’re cannibalizing their own brand. The doughnut eats itself. Twenty-five years from now, what are they going to use for decor?

Well written, Hannah. Atlanta is full of this. I think this faux evolution in decor is designed to fool the masses. It seems comforting, safe and convenient. The sad thing is that it is contagious. This decor could be a metaphor of ourselves. We live in an obese society that is littered with magazines and advertisements of thin people. The will power got lost in design and true preservation was abandoned.

This trend you see is not only in the A-T-L. It's everywhere. I had a golf shirt wearin' old republican curse me on the 16th st. shuttle the other day when a lady asked me about a "good local restaurant that is not a chain." I threw out the mighty Wyncoop the GSWR (golf shirt wearin republican) suggested every chain that was on the 16th street mall. After his every suggestion I said "Ma'am that too is a chain." Point is that this points to the laziness of americans. We demand convenience which gets us this prepackaged kinda design. Planet Hollywood, Hard rock cafe, Johnny Rockets, Barnes & Noble, Chick-fil-a. I digress though. I gotta bail and ride the trail.

Hi Hannah!
I was just entering your email address into my contact list and I thought I'd check out strongsilent.com! Hope you are well and transitioning safely back to the "real world."
We had a great retro Krispy Kreme in Nashville. It was all chrome and acute angles, an obivious homage to the tail-fin. Then they obiterated it and built a beige stucco eye-sore in its place. A Krispy Kreme in name only. I nearly cried at the devastation.