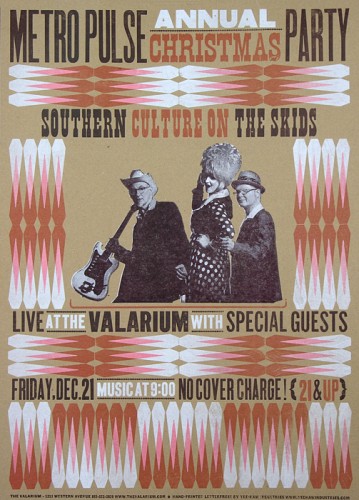 Yesterday I read this quote from Southern Culture on the Skids and I've been smiling about it ever since:

"Countrypolitan transcends music. It's a lifestyle, not a category of music...It's where rural and urban sensibilities meet. I mean, it's when you see trucker hats being sold in Beverly Hills boutiques or notice folks eating pork in Mebane, where I live, drinking a glass of merlot. Or best yet, when you see a motor sport invented by backwoods moonshine runners and bootleggers broadcast on Sunday afternoon into potentially every living room in America, there ain't no doubt it's a countrypolitan world..."

BBQ + Wine? Moonshine Martinis? Food is a good illustration of the culture mashing that goes on in a city like Atlanta. You can find cuisine from around the world, plus gourmet collards and pecan-crusted catfish. I dream of starting a cafe where you can get both a real biscuit and a smoldering latte in one sitting.

So much of our definition of "the south" is rural– plantations, magnolias, small town hospitality– so what happens when our agricultural roots get paved over? When we finally admit that we live in cities– even though "this used to be way out in the country." Leave it to a geeky rawk band like SCOTS to provide the correct terminology.

Now I'm feeling old. I haven't listed to SCOTS since Ditch Diggin' in the mid 90's.

I love SCOTS...they play The Earl every fall. I'm proud to have suffered a concert injury from a fried chicken drumstick. Makes Anthony nostalgic for Athens in the mid-90's.