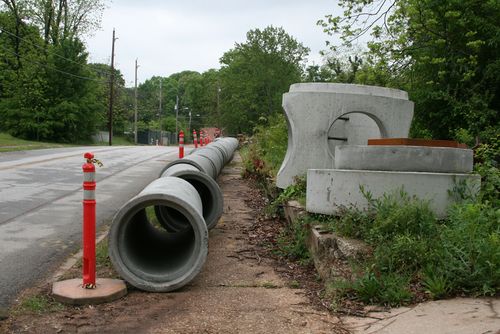 A few nights ago I dreamed our house was demolished to make way for the new sewer system. Only it wasn’t my current house, of course, it was my house in Forest Park, the one I lived in from second grade through graduation.

In the dream, a construction crew was boring a pipeline under Forest Parkway. Our house and Dee’s house and Mrs. Taylor’s house were toppled in pieces– all sideways with exposed wallpaper and pipework. Giant sections of concrete pipe were parked where our cars once sat. The house fragments were being hoisted onto flatbed trailers while bulldozers pushed waves of orange dirt down the hill.

I started yelling out the window of my truck (only it wasn’t my truck, it was my Dad’s truck, the one he had when I was a kid), protesting, but no one could hear me. Then the truck was skidding in the mud, or I was sliding, it's weird how my body merges with the vehicles in my dreams. Anyways, I was sucked down into the churning sewer and brown water filled up my ears and hair and mouth.

So. I know other people’s dreams are boring. But the pieces of the dream can be revealing– kind of like an index of my anxieties, like this blog! Each piece is like a post I meant to write:

I dream of walking down a hallway and it’s always that hallway. Or driving down a hill and it’s always Phillips Drive. I'm turning into the driveway of 5026, 2 houses before the railroad tracks. This is the layout of my dream house, and by that, I don’t mean like Barbie Dream House, with the elevator and a pool, but the default rooms of my random night wanderings. I know your dreaming mind is stuck in some old house too.

While my earliest childhood homes are vague and mythical, this house is memorized from a dozen years of wear and tear. I know the cracks in the driveway, the nandina bushes hiding the trash cans, the mismatched siding where we converted the porch into my baby brother’s bedroom. I can picture the pixelated view of the backyard through the screen of my bedroom window– glowing bug zapper blue at night. The smell of the soil under the spigot, under the elephant ears, behind the red-painted stoop where Dad hid his ashtray. That house was so small, you could lay in bed with your eyes closed and hear every movement of the family. The sound of bare feet on the hardwood floors, of cabinets opening and closing above the sink, the television on and whatever late night show I wasn't allowed to watch. I fall asleep and it is still the setting of my dreams.

Our property on Phillips Drive, along with 2 neighboring plots, was rezoned as commercial when I went away to college. It is now home to a CVS Pharmacy.

After 43 years in business, Attina's Music Store (previously hailed here as one of the most charming things about Forest Park) has closed. Many of old the commercial buildings on Main Street are slated to be demolished to make way for a new commuter rail line. This is an exciting development for Stumptown, but let's see... people will step off the train on Main Street and see what? I wish we could have both the train station AND the local, long-standing, independent businesses.

From Sherman's March to the '96 Olympics, Atlanta's history is just one long story of tearing stuff down and hoping that the new stuff will be better. 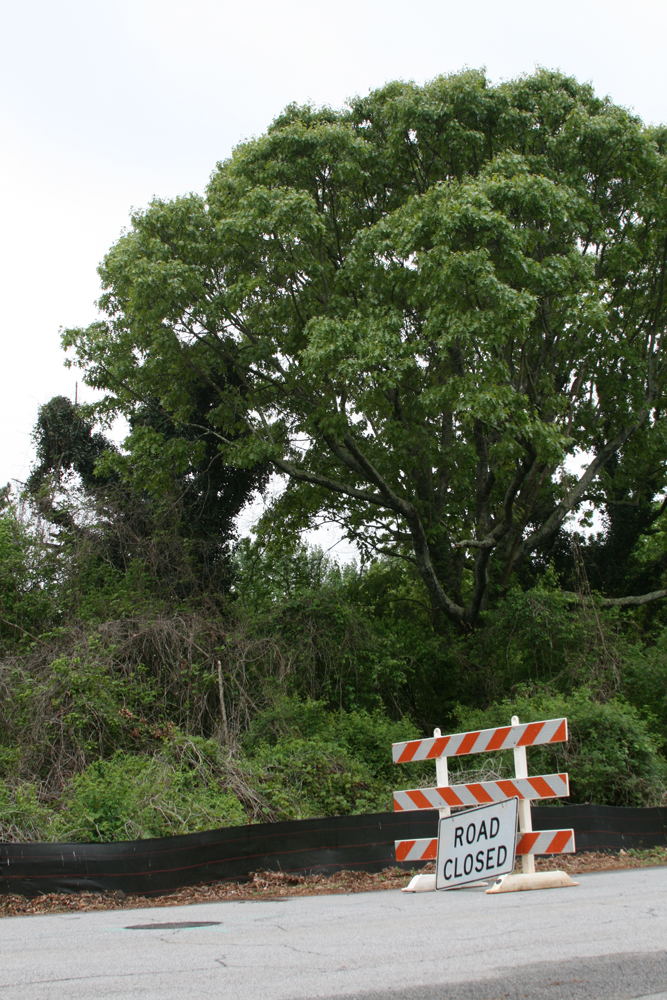 Last February, I referred to the Ghost Town of College Park. In September, we explored the 40-some acres of "secret blight" on bikes. Both times, it was all untouched kudzu, and I was enjoying the notion that this land had been sitting untouched for 30 years, like we were the first explorers to touch down on a lost world. We went back in March with a group of curious cyclists and saw what looked like a sewer construction project underway. Bulldozers had graded a wide swath of land and enormous concrete pipe sections were lined up in every direction. The return was unsettling, though I didn't admit it at the time. Oh well. As usual, I don't really know what's going on back there. I post here in hopes that some knowledegable commenter will set me straight.

Sewer construction upheaval is real all over Atlanta. I have seen the Tunnel Boring Machine and it looks like a sci-fi monster. Of course the idea of our ancient sewer system rotting and failing underneath us a nightmare in itself. I think all these developments combined with the usual stew of anxieties (drowning in a car wreck is classic, plus Fulton County just appraised my house at $39,000) to invade my dreams.

That house is gone--more or less. And what remains in our memorires and dreams is a gnawing metaphor for what P. Larkin called "a joyous shot at how things ought to be."

Brennan and I (and Karyn and Dave) went on a bike ride in the College Park ghost town a couple weekends ago and were surprised by all that sewer work. There happened to be a police officer parked on the street there, so Brennan asked him what was up. He told us that there had been lots of problems with runoff in the area, and the city decided the solution was to fix the sewers. No development plans that he knew of.

Lila: I should've known you'd have the scoop! But I wonder which city has initiated such a costly project– CP or Atlanta?

My oldest (now almost 19) has a fascination/horror with the Global Gateway Connector. We dream up crazy world domination theories around that stuff off of Roosevelt Hwy. I think your "sewer" must be part of the elaborate underground people (zombie?) moving network. Ha Ha. ?