A Date at the Airport 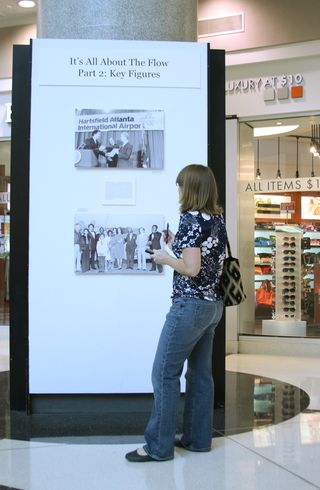 Friday night after work, Mug rode MARTA a few extra stops to meet me at the airport for a date. I wanted to see the photo exhibit commemorating the 30th anniversary of the “new midfield” terminal, or the airport as we know it today. It’s a whole different experience to visit the world’s busiest airport when you aren’t determined to catch a flight or locate an arriving traveler. It reminded me of going to a mall at Christmas – lots of people, very focused. Here’s some things I hadn’t ever noticed before: 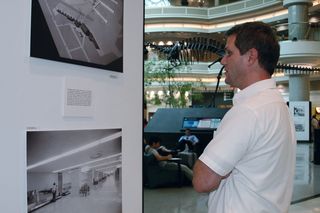 So the exhibit. It consisted of a few photos and architectural renderings mounted to the pillars of the atrium. As we cruised around the columns, taking photos of photos, reading the captions aloud to each other, and generally giggling and acting amused, a few busy commuters paused to assess the exhibit. It’s hard to explain why we found it so entertaining.

Maybe because the airport has been such an enormous presence in our lives, and this was like a rare chance to view the family album. Mayor Maynard Jackson and his wife Valerie were there, cutting ribbons alongside a baby-faced Jimmy Carter and the young Shirley Franklin. The CEOs of Delta and Eastern were captured in a rare moment of camaraderie.

At the anniversary shindig, George Berry, who served as general manager during the transition, said:

That day had to be one of the high points of all our lives, every one of us who worked on it, dreamed about it, and who thought that being a part of such a dramatic undertaking would be something that would mark us for the rest of our lives – and it has.

I have come to think of September 21, 1980 as a day that impacted my life, and the lives of all Southside residents, in ways that are hard to estimate. It was the beginning of the end for many residential communities around the airport. 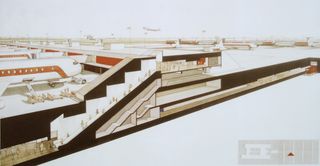 Both the 1961 and the 1980 terminals were the biggest, most advanced airports of their day, and both were quickly overwhelmed by the growing demand for affordable air travel. The "midfield" terminal survived because it was designed to be scalable. In the last 30 years, Concourse E and the International Concourse have been added to the east/west layout, along with the 4th and 5th runways to the south. This modular concept is simple and smart, but not very pretty. Terminal engineers took it as a compliment when Paul Goldberger, architecture critic for The New York Times said, “You’ve built a giant Xerox machine!” Each time it replicates, another chunk of my neighborhood is erased. 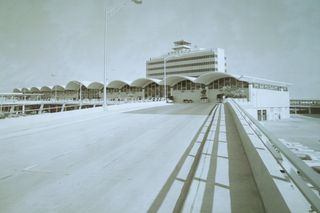 Before: Approach to the 1961 terminal. 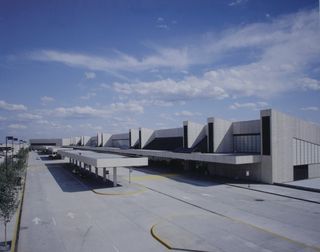 After: The Xerox machine welcomes you. 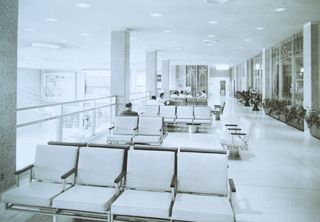 Before: Glittering tile, terrazzo, potted plants, and “The Oasis Lounge.” 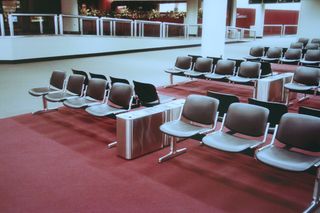 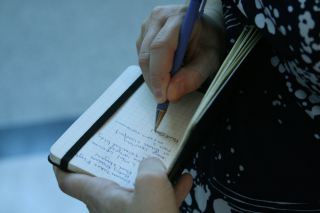 (From my notes: the ‘60s era photos were credited to Roberts and Company; The 1980 photos to Stevens and Wilkinson.)

As we dined on $10 chow mein and enjoyed people-watching in the food court, I considered our date night at the airport as a southside tradition. For generations we have come to these grounds for romance and adventure, either at the old observation deck or parking at “blue lights.” Even though this massive airport makes it possible for me to fly cheap 2 or 3 times a year, I still identify with the homeless folks who wander these halls, just here for the scenery.

I wish you had pics of when they had coin operated tv's attached to red/orange chairs there at the airport. THAT will always scream Hartsfield to me.