A Date at the Airport
Return to Murray Hill Ave 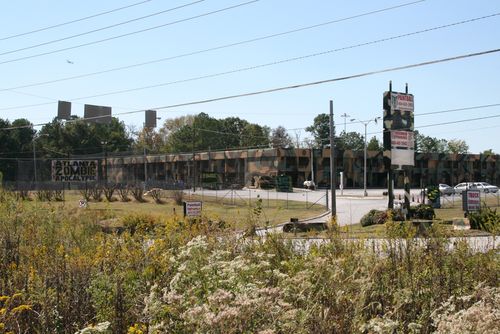 This weekend, I went down to Conley to take photos of Safety Wolf Recreation Outpost, a new and excellently-named paintball facility. Conley is an unincorporated community north of Forest Park where many of my friends and schoolmates grew up, including my husband. Right at the intersections of I-285 and I-675, it's best known as a hub for commercial trucking.

Safety Wolf is the reincarnated Truckstops of America complex on Thurman Road, a major fixture on the drive from Forest Park to Little 5 Points. My brother-in-law had his first job working as a busboy at this massive truckstop in the early '80s. The motel, fueling stations, and restaurants have been shuttered since 2005. It's been converted to a "combat sports facility" and – during the month of October – is the site of the Atlanta Zombie Apocalypse. I am so excited about this kooky reuse of urban blight!

Maybe blight isn't the right word. The recession has left us with so many empty buildings – foreclosed homes, half-built commercial developments and subdivisions. I'm not sure what to call these formerly-bustling, now desolate zones. Some see the end times, while others see opportunity in the dirt cheap ruins. What I love about this project is that the rundown qualities of the truckstop make it an ideal training ground for SWAT teams, paintballers, and zombie hunters. And the over-the-top camo paint job makes me smile.