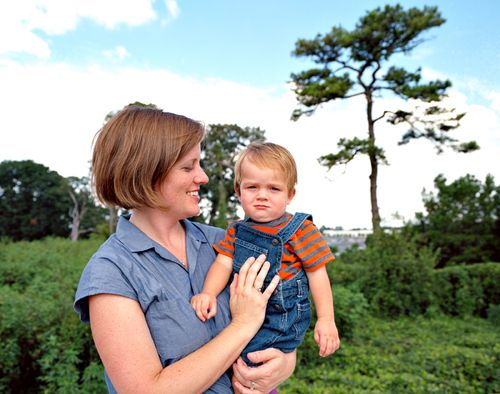 It's hard to talk to strangers. First of all, they're busy people. Or, in this case, not busy, just waiting for customers on the side of Old Dixie Highway. The humidity makes it feel like it's a hundred degrees out here and there's no escaping the brassy, late August sunset, slapping your forehead and making it shine. They just want to know if you pulled over to get your car detailed or what. Then they want to know if these photos are going to "get them in trouble."

If you have a big camera, having a baby with you really helps. A baby is still sacred; a "little one." If we were the undercover police, code enforcement, or scammers of some sort, we probably would've left the 16-month old somewhere else, somewhere air-conditioned. With his overalls and rowdy blonde hair, the baby is undeniable proof that we must be okay folks.

"I wish my kids was still that age," says the lady, after we introduce ourselves. Why do people always say that? How do they forget about the sleeplessness, the repetition of mopping up, packing snacks and rushing out the door, the paralyzing anxiety and humiliating love that constitutes life with a toddler?

"How old are your kids?" is what we say.

19 and 21. Both in college. One's in Charlotte, an aspiring chef. The other is just starting at Georgia Tech, for nursing or cosmetology, that part isn't clear.

It's hard to talk because of the airplanes. They are taking off half a mile from here, slicing overhead every 20 seconds or so. They cover the distance with audible muscle, climbing and blackening against the cloudscape. It looks cooler up there. The big jets roar and block out everything; the smaller ones buzz in the background. The baby clutches my neck and hides. He is the only one having an appropriate reaction to the noise.

I'd like to hear what Jeff is saying about this spot. He's middle aged, unsmiling. All I notice about him is that the white of his undershirt attracts stinkbugs and makes his shoulders look blacker, which he swats rhythmically as he speaks. He remembers Mountain View and without us even asking, remembers Plunkytown. His parents' parents lived over there until '71 or '72, when they tore it all down. I want to ask more but the planes keep coming and it's too loud to talk.

Once they appraise us as neither customers, nor troublemakers, but merely a bore, we proceed to make a few photographs. After several days of rain, some dirty blue sky is finally visible behind layers of scudding clouds. It's not the landfill we see out to the east, it's Stone Mountain.

"Look, an airplane." I say to the baby and point, following it from west to east. I say it over and over, so he'll learn the word.