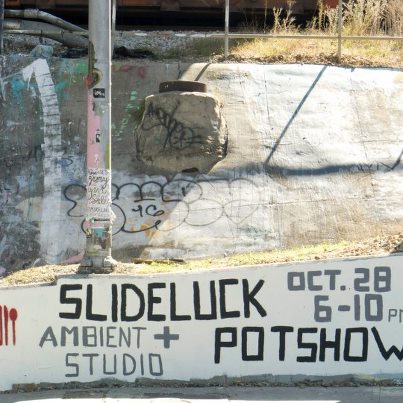 I'm excited that Johnathon Kelso's Mountain View photo series will be featured in Slideshow Potluck, an international slideshow salon presented as part of Atlanta Celebrates Photography. John fell in love with Mountain View after reading my essay "Walking Tours of Lost Cities," and started his own airport-area expeditions. We collaborated to produce the multimedia slideshow that debuts October 28 at Ambient+ Studio.

"Mountain View, GA" is a photo series that attempts to document the rapidly disappearing remains of what was once a thriving community near the Atlanta airport. From 1956 until it was dissolved by an act of the state legislature in 1978, the small town of Mountain View--so named for its clear view of Stone Mountain--was home to 3000 people. Though it was negatively impacted by jet noise from "the world's busiest airport," residents remember it as a quiet "Mayberry," where neighbors knew each other, kids played ball in the streets until dusk, and no one felt the need to lock their doors.
Plagued by allegations of corruption in the city government, Mountain View was ultimately doomed by the opening of the airport's new "Midfield" terminal in 1980. By then, The City of Atlanta's Department of Aviation completed is massive acquisition of Mountain View properties and relocation of the residents. The houses  were moved, sold, and demolished and an entire community was displaced.
Today, the city is scarcely remembered or discussed. The area is now part of unincorporated Clayton County, occupied by warehouses and airport-related industrial facilities. But the remains of Mountain View's neighborhoods, churches and storefronts are still visible beyond the blocked-off streets and kudzu-covered wreckage. Johnathon Kelso revisited Mountain View to chronicle what's left and what has grown in the ruins, from airplane-spotters and small congregations, to a roaming population of squatters and feral cats. These glimpses begin to trace the story of a lost and unmourned landscape.