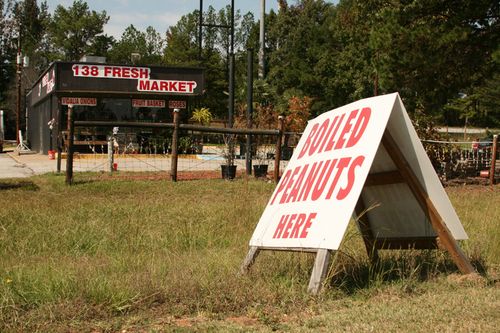 Some hopeful observations from the 17 mile drive south to Jonesboro on a bright, dry Saturday afternoon in early October:

Nestled between the concrete expanse of I-75 and the Sears parking lot, Olde Towne Morrow is a failed "entertainment district" that looks like a mirage or a movie set. I love that the public green spaces here are thriving despite the shuttered buildings in this ill-conceived faux village. Future developers should consider the site's potential as a futball facility.

A seasonal pop-up shop on steroids, this is possibly the most hilarious example of big box reuse I've ever seen. Here you'll find "the kingdom of the Dead, a void where monstrosities lurk, a place of tortured souls," which the billboards advertise as "next to the Old Navy."

Waffle Houses are everywhere. You'll find one on almost every interstate exit in Georgia, sometimes with double locations straddling both sides of the exit. As much as I love the "Golden Squares," such excess has always seemed like a local oddity, with bad implications for our health. Recently, I've seen vacant Waffle Houses reused as a lingerie/video store and a "We Buy Gold" shop, but this transformation to a farmer's market is particularly sweet. How beautiful that you can now buy muscadines and tomatoes in this former house of cheap, buttered hashbrowns.

This looked like a casual "cruise-in" of late model customs with 24" rims.

Haunted houses, soccer fields, farmers markets, and car shows? Plus the original suburban hackers-- I spotted a group of skaters "repurposing" the curbs, culverts, walls and rails of a vacant strip mall. Looks like the adaptive, creative, and playful reuse of suburban surplus is well underway on the southside.

Whenever I see spontaneous gatherings and activity popping up on the margins of commercial blight, I can't help but think developers have the formula backwards... that parks and public spaces should be the economic generators instead of malls and highways.