2 minutes in Mountain View
City Hall Revisited: Who are the buildings in your neighborhood? 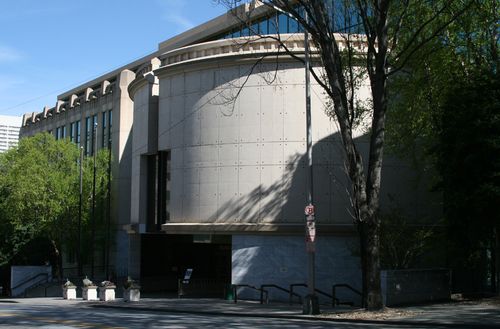 I visited 55 Trinity Avenue this week, also known as Atlanta City Hall. I thought maybe I had been to City Hall before, but I somehow fudged that assumption, even to myself. The place is unmistakable, and this was definitely my first trip.

The City Hall complex fills the entire block between Mitchell, Central, Washington and Trinity at the southern edge of downtown Atlanta. “City Hall Tower” on Mitchell Street has that churchy, marble-carved, gilded look of pre-war government buildings. It rises 11 stories right between the the gold-domed state capitol, which I toured as a giddy elementary schooler, and the Fulton County Courthouse, where I report for jury duty every 18 months or so. You can’t miss it, yet I have missed it all these years.

I paid the parking meter, climbed the stairs, emptied my pockets for the security scanner, and rode a claustrophobic little elevator up to the 3rd floor before I realized that this was not the right City Hall. I later learned that this 1930 neo-gothic landmark –  the 4th of Atlanta's many city halls –  was replaced by a new annex in March of 1989. The office I needed was on the other side of the block.

Opting for the ornate marble staircase this time, I pushed through the heavy oak doors and walked back outside. This is the dumb argument I had in my head as I made my way around the block: I can’t believe you’ve never been to City Hall. You’ve lived in Atlanta almost your whole life. You write about it, talk about it, call yourself a native. Wait, I thought, let’s be honest. I’ve never actually lived inside the city limits. I’ve lived in Forest Park, Decatur, and East Point. Why would I ever need to visit Atlanta City Hall? Technically, I’m not an Atlantan!

As I rounded Washington Street, past a half dozen local news vans parked and chugging on generators, I caught my first glimpse of 55 Trinity. After my ten minute detour in the wrong building, a place that resembled the "fabulous" Fox Theatre, I could hardly believe this was right. Atlanta’s new and improved City Hall hovered before me, a space-age stone bunker, flanked by walls of green mirrored glass. The flagpoles out front suggested that this might be a government building, but it was the stream of visitors – moving briskly in suits and uniforms, dangling credentials and briefcases – that confirmed that I had indeed found the city seat. That, and the sign out front. The brass letters said ATLANTA CITY HALL in the same terribly dated typeface that dominated banners and signage and t-shirts during the Olympics.

Oh wow, I laughed. I’ve never seen this before in my life.

Inside, my sense of wonder and unease bloomed into a near panic attack. I sent my bag down another conveyor belt and stepped through a metal detector into a bright, soaring atrium. It was an overcast afternoon, and white daylight flooded the hollow, glass-topped heart of the multi-story atrium. Dozens of conversations drifted through the hall, drowned out by the busy splashing of a central fountain. The heads of city officials bobbed along the glass rim of each floor. The effect supposed to be jaw-dropping and downright heavenly – there could’ve been a harpist on the mezzanine. But I was left flipping through a set of stale suburban references in my head: it’s a hotel, a shopping mall, it’s the bridge of the USS Enterprise. A cluster of middle-aged ladies in white suits posed for a photo in front of a conference room.

With the parking meter in mind, I completed my errand quickly. I couldn’t help but critique the brassy brass fixtures, the gaudy layers of green and rose marble. It looked like nothing had been updated in 20 years. All the décor choices that communicated stability, refinement, and luxury in the early ‘90s, now simply said one thing: 1996. We are stuck in 1996. The year I graduated from high school.

I left this time warp with a swirl of questions. Who designed this place? Was it a success in 1989? Are there plans to update it? Or should it be preserved, along with dozens of other downtown buildings, as an icon of Atlanta's pre-Olympic glory? The fact that there's virtually no information about this building on the internet, and no images, leads me to believe that we are not yet to the point of "celebrating" late '80s and early '90s architecture in this city.

I worked as a intern for a joint venture that designed the Atlanta City Hall Annex and Renovation in the late eighties. The joint venture consisted of Jova Daniels Busby (who recently declared bankruptcy), Muldawer-Moultrie, Architects and Chris Harris Partners. As with any joint venture, the design decisions were made by three or four 'chief designers'.

Jeff, thanks for your comment and the link to that amazing photo archive. I continued digging into my questions and just wrote a follow-up post. Although I have been able to find some of the history and details about City Hall Annex online, there's very little recent thinking or news about the place, which makes it feel like it's slipping into anonymity. which in Atlanta, means that the building could vanish any time.