Atlanta City Hall Annex (1989)
The perfect portrait for this story

City Hall Revisited: Who are the buildings in your neighborhood? 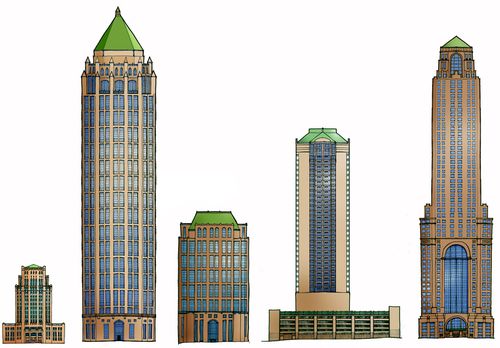 Now that I’ve discovered City Hall, I see it everywhere. It’s easy to spot the tower as I cruise north on I-75/85 or west on Memorial Drive. Its green top stands deferentially next to the gleaming Capitol dome, rising above the downtown federal buildings that form a cliff overlooking the river of traffic below.

I also see it in Midtown. That pointy green roof and gothic flourishes appear to be the inspiration for a whole crop of late ‘80s skyscrapers. One and Two Atlantic Center (a.k.a. the IBM Building and Mini-me) and the Four Seasons Hotel have the same stately ambitions. Today I spotted two high-rise condos on Spring Street wearing the watered-down ideas of City Hall.

I might not have noticed this resemblance without playing ask-an-architect. My office is swarming with them. I cornered one by the microwave one day in the middle of nuking his lunch.

“At what point is a building considered ‘historic’?” I asked.

“It’s typically the 50 year mark,” he said. As he stirred his potatoes with a plastic fork, he grew thoughtful. “But just because it’s old, it doesn’t mean it’s historic.”

From our kitchen window, we looked down on the shiny High Musuem of Art and an assortment of skyscrapers arranged down Peachtree Street. “And just because we’re sentimental about a building, it doesn’t mean it’s good.”

As he darted off with his steaming plate of leftovers, I felt even more puzzled about Atlanta’s bad eighties buildings – the landscape of my childhood. Who gets to decide their value?

My ad hoc research on Atlanta City Hall presented another curiosity: Why is it so hard to get any information about the buildings that surround us?

Between Google and Wikipedia, IMDB, Yelp, and Amazon, I have become accustomed, or spoiled, to think that I am 3 clicks away from an infinite stream instant, free data and opinions about practically any subject that springs to mind. But buildings are an exception. In order to identify the architect of record for a major downtown structure like City Hall, it’s hard to believe I must either a) buy an AIA Guide to Atlanta or b) buy access to the AJC archives.

I finally chose the latter, coughed up the $5.95 for a day pass and found a couple articles from 1989 that addressed my questions:

2. Was it a success in 1989? Some teenagers interviewed at the opening festivities gave it an enthusiastic appraisal. But the nicest thing critic Cathy Fox could say was the annex “skillfully communicates an ideal of city government in the plan.” In other words, it looked good on paper. She went on to compare it to the original, 1930 tower next door:

The “Neo-Neo-Gothic of the new is less graceful than Mr. Preacher's detailing, and applying it to a building of these proportions doesn't quite work. One is reminded of seeing hand-me-downs from a tall, elder sibling on a chubby little sister.”

Likewise, Preacher's detailing, which was so elegant at the 11-story scale, looks cartoonish when applied to 50 story skyscrapers and repeated across Midtown.

3. As for my last question – Should it be preserved? – I guess it’s too early to say. Reading Maria Saporta’s recent editorial “As historic buildings disappear, Atlanta losing its sense of place,” I thought more about that “historic” designation and the anonymity of Atlanta’s places.

To those of us who are not planners or developers, critics or reporters, who don’t own an AIA guidebook or have a registered architect nearby to pester, our environment is a mystery. I’m not talking about the signature parks or skyscrapers – the places you can google, but ordinary roads and strip malls, the intersections and bridges, the grocery stores, fast food joints, gated subdivisions and apartment complexes… they were all designed by somebody. A first step towards understanding, valuing and eventually preserving these places may be simply claiming responsibility for them. A free, online platform for sharing information about buildings (like this) would be a first step towards better knowing our own city.

I remember the Project Manager looking for a sample of the exterior cladding from
the existing tower so we could match the color and design. Much to our horror, the city used a maintenance person to take a sledge hammer and bust off a piece (which we had to add to the list of things to get restored).