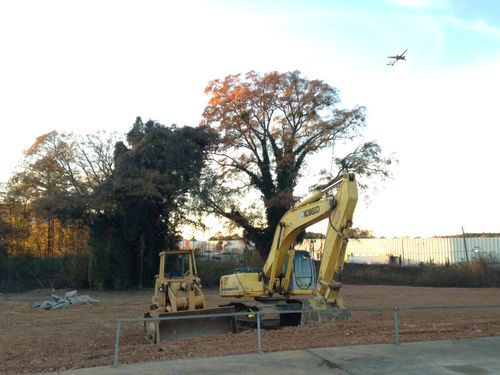 This part is so predictable, it’s almost boring. Like death. I dread writing it and, in fact, have been putting it off for months.

Last fall, a friend sent me some photos from Mountain View. They showed a freshly cleared demolition site: a yellow backhoe parked beside a bulldozer, a plane of combed red dirt, and a tidy stack of broken concrete slab.

I knew right away it was the lot at the corner of South West Street and Old Dixie Highway. I could tell by the angle of a jet aiming up and over the blank backside of a low warehouse. I’ve spent a lot of time with that one ivy-eaten oak tree, its top branches honeyed by the sunset. It was the site of the last remaining house on the last remaining corner of the street where I used to live.

The back of my neck felt hot as I flipped through the photos. It felt like a particularly large bill had finally arrived in the mail. You stand there in the street for a little too long, vaguely wishing you could mend the torn envelope, close the mailbox, return to sender. It was a dirty shock, but it could hardly be called a surprise.

They tore down Dell Air.

I have been observing the steady erasure of this block over the last decade. I’ve been to this spot many times, always in search of some clue about what happened to my house. What began in the early ‘80s with residential buyouts continues today with the clearing of commercial properties. It’s a slow process, imperceptible to the average passerby. The demolition seems to happen in slow motion, or in the night. I never actually witness the backhoes in action. I just cruise through and another Mountain View artifact is missing, fresh asphalt in its place.

Aside from that clawed up, unsettled feeling, it’s no surprise because the plans are out there; they’re public record. Mountain View has been at the top of Clayton County’s list of redevelopment projects for over a decade. While it may look like a good place to dump tires, in the eyes of a planner, Mountain View has a lot going for it. Clayton County’s Economic Development Director called it “the last great green, developable area inside the perimeter.”

It’s a delicate pitch. Mountain View is not a blank slate. There are still a few businesses, homes, and stragglers that need to be cleared. The only “green” swaths fall between the rows of warehouses, when summer kudzu unfolds across the ruins of the old neighborhoods.

Still, the location, wedged between the interstates and the airport, is ideal for logistics firms, freight-forwarders, and government agencies like the FAA. This proximity to the airport once made it an undesirable place to live. Now that’s the chief selling point. Clayton County is betting its economic future on these haunted acres. 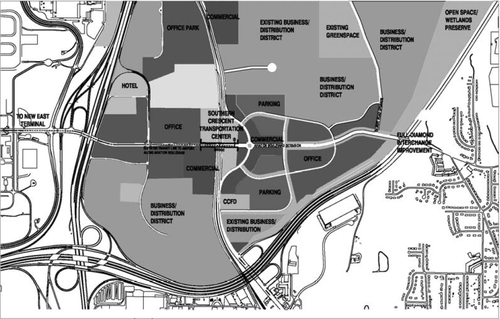 A conceptual land use plan from 2003. 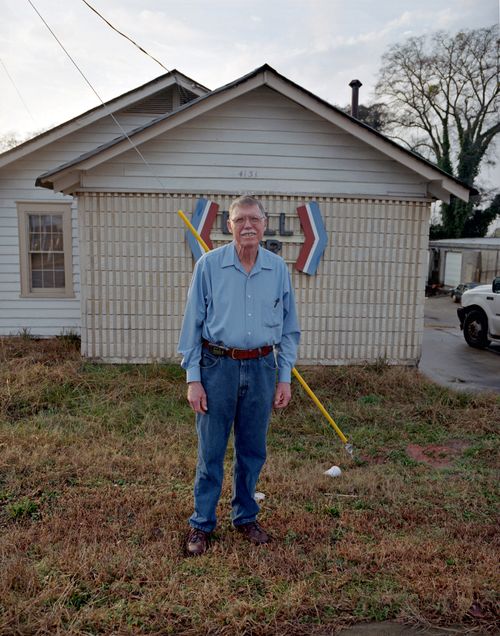 The last house on South West Street wasn’t really a house anymore. It was the headquarters and sole location of Dell Air, a heating and air conditioning shop founded by Dell Thompson.

The house sits on a busy stretch of Old Dixie Highway facing the railroad tracks. As the only building left on the block, South West Street is essentially the driveway for Dell Air. The neighborhood of his childhood home sounds rural: chickens and goats, garden plots, a general store, and outhouses.

Thompson lived there until 1960, the year he graduated from Forest Park High School. That’s when his family moved out of Mountain View. Dell married, had kids, and came back in 1973 to set up his own business in the old house. He knew the location was ideal; he had learned the trade right down the street at his first job with Estes Heating & Air.

It should be no surprise that I had a family connection to Dell Thompson. His wife was my mother-in-law’s best friend and his son grew up with my husband. Now retired and living in Alabama, he met me at the office during one of his visits to Atlanta for medical appointments. I told him my parents lived on South West Street, it was my first childhood home too.

Thompson reminded me of that stoic uncle who’s a fixture at every cookout and holiday, maintaining his quiet post. A tall man in his 60s, I imagine he was a redhead before his mustache turned white. I recognized the heavy hands and shoulders of a long career in blue collar labor. Thompson’s measured, quiet demeanor could be a form of shyness. Or maybe it was the natural reticence of any interviewee. He kept his hands in his pockets and directed his words not really to me, but to the spaces off to the side. It was hard to get him to talk, so I asked for a tour.

The house had survived many conversions and additions over the years. The bricked-in porch was converted to the company vault. A 2-storey addition off the back of the house  more than doubled its square footage and gave the place a decidedly commercial entrance off Old Dixie Highway. This architectural hodge podge was cemented, literally, by a wraparound parking lot that connected the office to a long storage warehouse.

Even so, the heart of Dell Air was a lovely old bungalow. For me, it was an obvious model for my lost house down the block.

Inside, the domestic touches gave me flutters. The arched doorways and heavy glass knobs. The glossy tile indicating an otherwise hidden fireplace. Look past the traffic jam of filing cabinets and a service map rudely stapled to the wall, and it wasn’t difficult to imagine living there.

Except for the airplane noise. Due to the constant roar, business was conducted down the hall, in the unfortunately wood-paneled, but better-insulated addition to the office. The whole time we were talking, we were also lip reading. It’s a skill, he joked, that was part of growing up in Mountain View.

I asked if he remembered when the jet noise started to become a problem.

The Nancy Hank line, which ran mail for the U.S. Postal Service, was a regular presence in the neighborhood. It came through every morning at 9am, made the trip to Macon, Savannah and passed through again by 6pm. There were 3 crossings in Mountain View, each one a dangerous intersection.

“The trains were always billowing black smoke,” he said. “In the ‘50s, they tried to make the trains slow down.”

He shook his head. Another lost cause. Before the trouble with the airport, he told me, it was the trains. This was never a great place to live.

We stepped outside and I snapped some photos. He casually mentioned that the house was going to be torn down soon. He already had a deal with the County to sell the property, it was just a matter of timing.

I kept digging for some trace of sentimentality. Wasn’t there anything about the place he would miss? Not really, he said, amused that I would suggest it.

Thompson was pragmatic, but he did show me one thing. We searched for spot where the back stoop used to be where his initials and his brothers’ were etched in the concrete. He kicked aside the clumped weeds to find it: D.T. E.T. 1955.

Small fingers in wet cement. He made his own tiny memorial as a child. 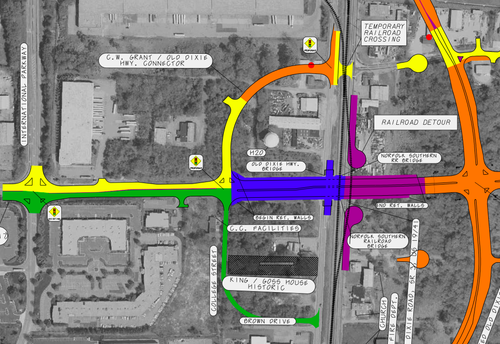 I found a Georgia DOT map that shows how Mountain View will be transformed into the hub of a vast transportation network, connecting the new Maynard H. Jackson Jr. International Terminal (“Atlanta’s Front Door to the World”) on the west with I-285 to the east. At the center of these plans is the new Southern Crescent Multi-modal Transportation Center, a proposed commuter rail line that would connect Atlanta to Macon.

Even when you know the plans are out there, it’s jarring when it happens. A decade is a long time to wait, for rumors to drift, for people to protest, then dream, to be converted, then forget what the planners pitched. Planners can study and propose ideas, but they have no authority to build. It could take decades for market conditions to align. In 10 years, a baby becomes a fifth grader. In ten more, that kid is gone, his childhood home fixed in memory. Meanwhile, the eraser is a lumbering thing.

According to the map, Mountain View’s main streets, Old Dixie and Conley Road, will be relocated. A constellation of red dots mark structures for demolition, including Dell Air. Many of the buildings pictured in the base map are already gone. There will be nothing left of the original Mountain View community, except the name.

The red dots are precise and final--a glaring period that puts an end to all my words.