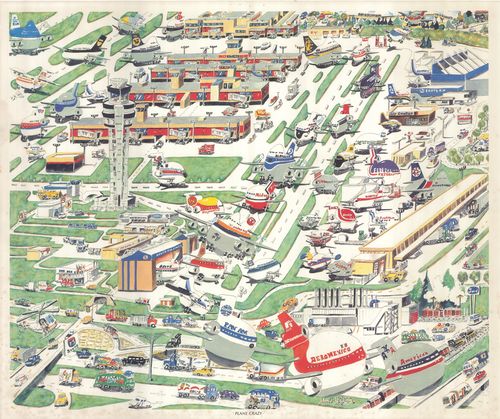 I bought this framed poster, a print of an illustration called Plane Crazy, at a flea market in Monteagle, Tennessee for $10. This was not the giant, roadside I-24 Flea Market that greets interstate travellers at the peak of Monteagle Mountain every weekend. It was the other flea market, the one happening simultaneously, further down Highway 41, where locals go to buy and sell melons and tomatoes, chickens and ducks, camo and boots (new and used), taxidermied deer heads and scabby-tailed puppies, and strange collections of VHS tapes, glass ashtrays, and framed art. It’s the thrift store for a town without a thrift store, a yard sale for a community without yards.

Since I was standing in a gravel lot on a mountaintop in Tennessee, it took me a minute to recognize the airport. The airlines are now mostly defunct: Eastern, Pan Am, Piedmont. But the orange terminals caught my eye. Then the details: the Hapeville Ford plant, I-75 and I-85, and a MARTA train the size of a caterpillar. I have never seen such a wacky, colorful, loving representation of the gargantuan airport in my backyard.

The old man selling this drawing took my cash and I told him it was the Atlanta Airport. He didn’t know anything about the poster or where it came from. A tiny signature at the bottom says Alex Black (Psalm 139) and a tiny bus on I-75 is labeled “Convention ‘88” with a donkey. Maybe this poster was commissioned for the Democratic National Convention in 1988. Or some celebration surrounding a milestone at the new Midfield Terminal, which opened in 1981.

Whatever the occasion, this poster is evidence of an interesting moment in the history of aviation, of Hartsfield-Jackson International Airport, and of the southside of Atlanta. It is a celebration of the Atlanta Airport. With all those big-nosed, cartoon airplanes, all its Where’s Waldo activity, in its goofy and specific attention to detail, it makes the airport look fun, or even beloved. 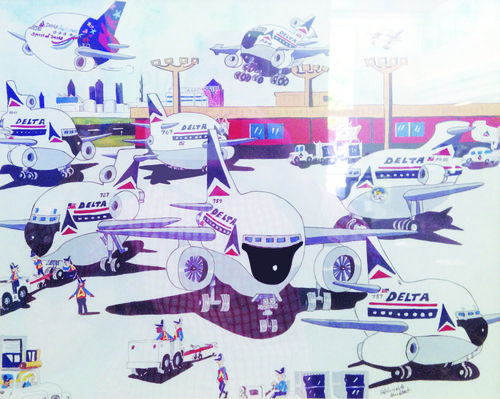 The next day, Mug spotted another Alex Black creation hanging on the wall at Delta Community Credit Union. This one looks like a playful, Delta-commisioned tribute to its fleet and employees created, maybe, around the 1996 Centennial Olympic games.

This one feels like an ad, where the first was more like a tool for placemaking. If I commissioned an illustration of the airport now, what would be celebrated?

Hi - I ran across this post on s search of the artist Alex Black. I found a print of his and I'm trying to learn more about him, but this is just about all I can find. Do you know any more about him?

Alex Black worked at the Atlanta airport. He did a few numbered posters depicting the airport. I have two of them. He signed them Alex Black PTL(praise the lord).

I bought the same poster for my husband, a Delta mechanic. It was at an Atlanta area arts and crafts show and I purchased it directly from the artist. We have # 62 out of 950. I believe Alex was also a Delta employee and I do know for sure he worked at the airport. I'd love to find some more of his artwork and ran across this post while searching the net. Have you learned anything else about him?