I wish ATL had an observation deck 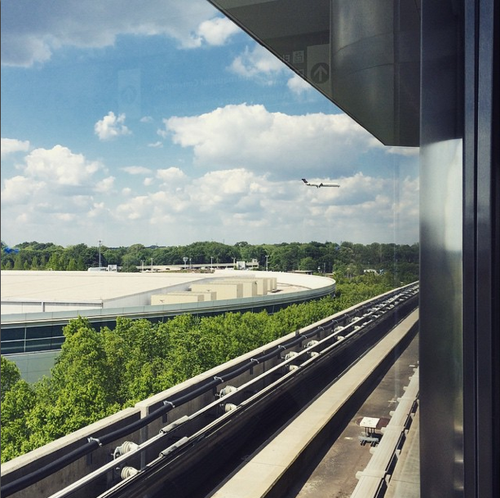 I wish there was a good place to watch airplanes land and take off at Hartsfield-Jackson. My kids would love it, but really, I would love it.

It would be noisy and smelly, sure, but also mesmerizing. At 4,700 acres, HJ-AIA delivers the kind of vast vista that Atlanta sorely lacks. We don’t have waterfront views, or any kind of vantage point for the city. What we do have is a massive airport. It's our city's biggest asset, and we should leverage it for cultural, not just economic opportunity.

Whenever I get a glimpse of Hartsfield-Jackson, I'm impressed by the scale of it, and I'm not even an aviation buff. I find it kind of soothing to watch the relentless pace and precision of all those well-choreographed takeoffs and landings, one every few seconds. It’s an enormous operation, the world's busiest, apparently, but it's hard to get a sense of the whole.

I’ve tried to watch planes from the upper floors of the Airport Hilton, restaurants on Virginia Avenue, spots along Main Street in College Park, and from the elevated MARTA train. I often see people pulled over on the side of Loop Road to watch and take photos. These people get the cops called on them.

All these ad hoc observation decks feel risky, like I’m trespassing. And none of them provide a very good view.

We need a public space for this. Not just for “post-security” passengers, the Delta Elite SkyClub members and such, but open to all and free of admission.

This observation deck would be a great place to take my kids, to meet people on their way to or from the airport, to dine, stroll, shop and people-watch. Picture a boardwalk, or promenade. Something as sweeping and grand as the airport itself. Picture the BeltLine, and its re-orienting effect on businesses nearby. Or just picture Frankfurt's recently re-opened "Visitors Terrace." 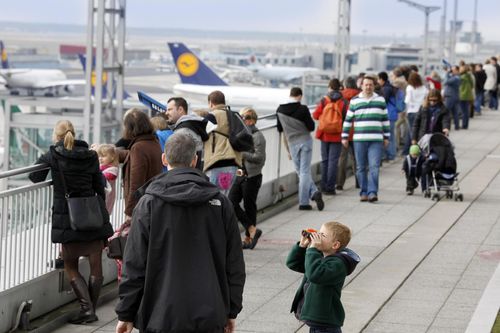 Here in the U.S., SFO is planning to build 2 new observation decks: one in a hotel development and one that's entirely open to the public. At DFW, there's a public observation "plaza," with a memorial. Raleigh-Durham has an observation “area” which seems like a good post-911 compromise. It’s more like a park with a playground and coin-operated telescopes to view the overall airport operations. It also features “air traffic communications broadcast via a loudspeaker for the curious public.”

Why do these airports do it? Why invest in an amenity that does not directly move passengers, or benefit airlines?

Airports used to have observation decks. 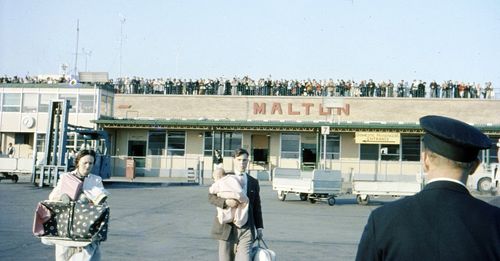 in the jet age, when aircraft were even noisier and nastier than they are now, people lined up to watch the action at airports. Anytime I talk to a pilot, they have an origin story about spending time at an observation deck as a child, watching the airplanes for hours. The curious public was not so weary of air travel; airports were not so hostile towards the general public out of security concerns.

So observation decks satisfied an early PR need of the aviation industry, and along the way, became really interesting communal spaces that inspired a generation of pilots, flight attendants, and air traffic controllers. But they also served as a friendly link between the community and the airports themselves.

Currently, the Atlanta Airport doesn't have anything like this, and it has only recently begun thinking in terms of community connectivity. For decades, the surrounding cities have been hunkered down, trying to protect themselves from airport noise and expansion. What if they turned their faces (and storefronts and parks) back towards the runways? When’s the last time the southside celebrated the opening of a new park?

This should happen, and the airport should do it. As a symbolic gesture to the community. As an amenity worthy of a world class airport.

Several years back H-JAIA was considering an observation deck on the north side of the airport near Virgina Avenue. It was in the active planning stage when a certain General Manager asked why the airport is spending money on an amenity that won't generate revenue. This is the same guy that didn't see any value in cell phone lots.

Thanks, Brian. That is so cool. I would love to see those plans! It's disappointing that the airport wasn't willing to make the investment. It could be a unique cultural landmark that improves property values and the image of the airport. I'm hopeful that the Aerotropolis Alliance can take on these kinds of collaborative projects.

I have looked at this site for awhile. I lived on McDonald Street and went to Maple Street Elementary School. Great memories and I was there when my parents first learned of the airport expansion and one of the last families to leave in my area in 1968. Saw first hand how the folks were treated. But I have the greatest memories of walking to the town of college park and all the parades down main street. I was one of your other entries about ATLmaps. I would love to see the overlays and find my old home and Church. I can't seem to find the sites that have this. Can you pint me to any of these. Thanks for the help

Hi Rick,
Thank you for reading. My ATLMaps project is located here: https://atlmaps.com/#/projects/177
You may be able to locate your old home on the 1967 Airport Area Map overlay.

Additionally, check out the maps and photos on Historic Aerials: http://www.historicaerials.com/

Most of my research came from these sites and the GSU digital archives: http://digitalcollections.library.gsu.edu/cdm/planningatl

Hannah, Thanks for the links, found Aerials of everything. It is amazing that at age 10, when we moved, some 48 years later things were where I remembered them to be. We were part of mid to late 60s college park leveling.