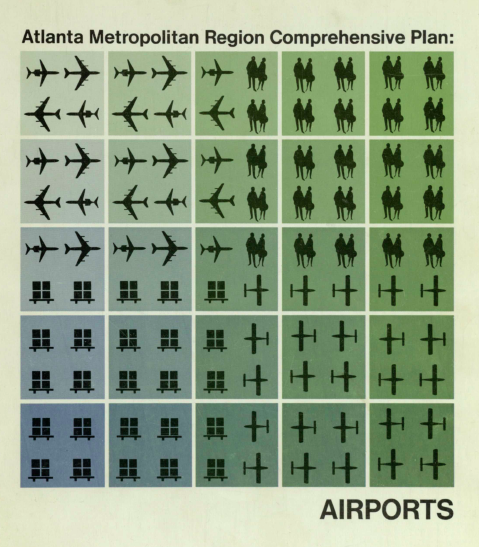 Digging around in GSU's digital collections of planning documents, I found this 1966 report--a high level assessment of Atlanta's metro airports. I can't resist the stylish mid-century graphic design and clean typography, and the content and infographics are just as sharp today as they were 50 years ago.

Even more impressive, these plans contain the seeds of the airport we recognize today. It acknowledges the growing conflict with the surrounding neighborhoods and clearly recommends the residential buyouts that would transform the southside.

Below is a map that shows the rapid pace of residential growth around the airport. The areas in gray were established before 1955. Green areas were developed in the subsequent 10 years (jet operations commenced in 1960.) Faintly, in blue, you can see the lines representing the "generalized pattern of jet aircraft noise." 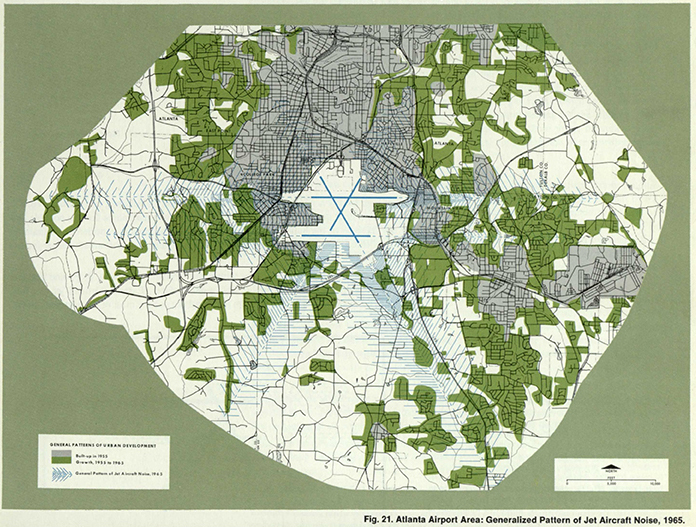 My first reaction to this map is, See? We were here first!

Hapeville, College Park, East Point, Mountain View, and Forest Park are mostly gray. All of my childhood homes are in the gray, built long before 1960, when things started to get real at the world's busiest airport. This is an important point, as surly outsiders are always acting like these neighborhoods owe the airport for their very existence, when in fact, they predate the airport as we know it.

But then I see these odd patches of green sprouting up along the runway edges, despite the noise. Certainly after 1960 developers and planners should have caught on that the airport and its noise impacts would only expand. "Zoning," the report states, "has been quite unable to cope with the problem." How was this allowed to happen? 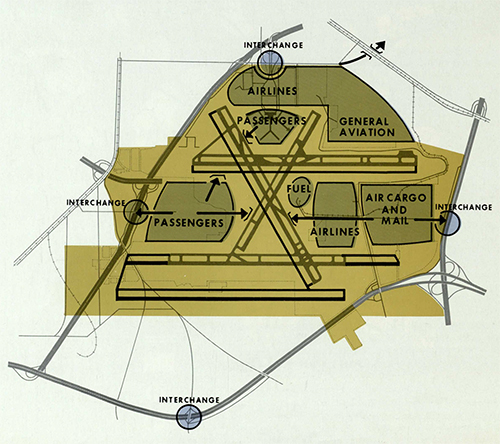 Many of those green patches are swallowed up in this diagram, a "Generalized Development Plan," which concludes the report. This is the first suggestion of replacing the original criss-cross runway pattern that was responsible for traffic delays with a parallel runway system. A 3rd parallel runway was predicted to accommodate the forecasted demand in 1980, but it was followed by a 4th runway in 1984, a 5th in 2006, and a 6th runway is currently in the making.

This sketch also proposes the Central Passenger Terminal concept, which would eviscerate large parts of College Park. The plan suggests airport connections to the still unnamed MARTA line, and all three interstate highways. The proposed eastern interchange at I-75  was recently completed with the opening of the Maynard H. Jackson International Terminal in 2012. All visionary moves that took nearly 50 years to realize.

Here's a quote that has always haunted me. In a 1980 interview celebrating the opening of the new Central Passenger Terminal, which modernized ATL, doubled its size, and delivered on the 1966 plans, Mayor Maynard H. Jackson, Jr. was asked if would have done anything differently. He said:

"Hindsight is always a great help in detecting problems. There are several things I would have done. One would be to work closely with the local jurisdictions on zoning, limiting development around the airport to industrial areas with no residential build-up. Also, we would have worked to resolve the potential difficulty with Clayton County a long time ago. Years ago, I would have attempted to annex into Atlanta the entire airport reservation… all of this would have been completed before the new terminal was built."

This is one of the only instances I have found where Mayor Jackson addresses the conflict between airport communities and the massive airport that now bears his name. It's weird to hear my home county named among the great leader's regrets. It's like hearing him say I wish you were never born. And what if the whole airport area had been annexed into Atlanta, like the original 284 acre airport tract, purchased in 1929?

It's also a subtle criticism of previous planners and leaders, like Mayors William Hartsfield and Ivan Allen, Jr., who directed significant investments into Atlanta's aviation assets, but failed to head off the "difficulty with Clayton County" and prevent "residential build-up" around the growing airport.

I have often wondered about airport plans leading up to the celebrations in 1980. When did planners realize how big this thing could be? And when did they start planning for the busiest airport in the world? The answer is: almost immediately after the first jets started traveling out of Atlanta. At least as early as 1966, with this report.